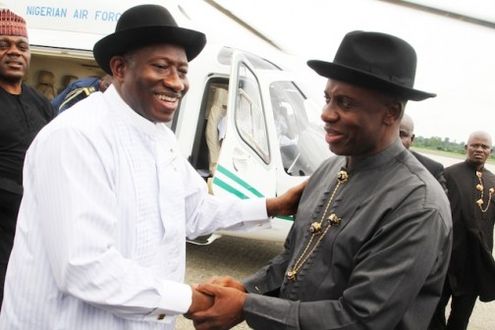 As the political battle towards 2015 gathers momentum, a Lagos-based clergyman, Prophet Marcus Tibetan has revealed that President Goodluck Jonathan would not contest the 2015 general elections.

Speaking with journalists in Lagos while unfolding his predictions for 2014, Prophet Tibetan said that some powerful forces in the country would conspire to force Mr. Jonathan to drop his 2015 ambition just as he prophesied that the Peoples’ Democratic Party,  PDP, will win the elections.

Tibetan said, “PDP will win but not with Jonathan. PDP has no trouble within it. Jonathan will not contest. God told me that the generals have concluded on Jonathan.”

He also urged former the immediate past governor of Ogun State, Otunba Gbenga Daniel to pray hard against political persecution that would lead to his being jailed for corrupt practices, just as he also asked another former governor of Oyo State, Otunba Adebayo Alao-Akala to watch against paralysis being visited upon him.

The clergyman also advised Rivers State governor, Chibuike Rotimi Amaechi to pray against premature death as the country approaches 2015, saying the forces that eliminated a former national vice-chairman of the defunct All Nigeria Peoples Party, ANPP, Marshall Harry, might also do the same to him.

On the 2014 FIFA World Cup holding in Brazil, Tibetan predicted that the Super Eagles would reach the semi-finals, but prayed that nothing negative would happen to the national coach of the team, Mr Stephen Keshi, in the build up to the mundial.

“We are going to make a lot of achievements in sports. We will do well at the World Cup, if they [those in authority] should allow [Stephen] Keshi to perform his duty.

“But my prayer is that Keshi should not drop dead before that time. If nothing happens to him, we will reach the semi-finals”, he said.