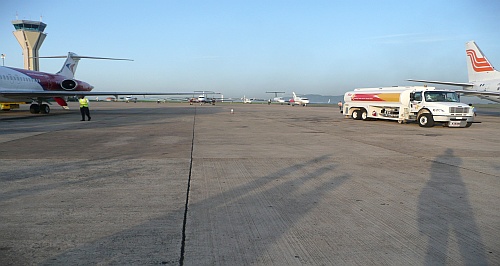 Aviation Minister, Ms. Stella Oduah, yesterday said government is working to give the ever busy Nnamdi Azikiwe International Airport, Abuja its second run way to ease the burden on the only existing runway.

The minister’s assurance came on the backdrop of passengers call on aviation authorities to expedite action on the construction of a second runway following the recent blockade on December 4, of the only runway at the airport by a Saudi cargo air plane; a development that led to flight cancellations.

“It is not proper for us to have one runway for airport such as busy as Abuja”, Oduah said.

“We are waiting for the resources to be able to do the second runway. The second runway was started and had an issue along with it. So, instead of putting it at the back burner, we are bringing it up again because it is very crucial”.

She added: “If anything happens, the nearest airport will be Minna but Minna has its limitation. There are some sizes of aircraft that Minna cannot take…Government will do the second runway as soon as possible but it is expensive”.

The minister also dismissed criticism that it took 17 hours to reopen the Abuja airport after the Saudi cargo plane hit runway repair equipment and got stuck there, saying aviation officials worked round the clock to ensure the removal of the huge cargo plane – a Boeing 747 – and  that they deserve commendation for the work they did rather than condemnation.