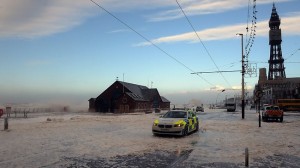 A storm lashed Scotland and other parts of Britain with gusts of up to 142 mp/h (228 km/h), killing one person and causing the cancellation of all trains and some planes.

More than 25,000 homes were left without power in Scotland and Northern Ireland.

Forecasters warned that the storm could produce the worst tidal surge in decades along the low-lying coast of eastern England later in the day.

The British government was reportedly to convene its emergency committee to discuss its response to the storm.

All rail services in Scotland were cancelled because of debris on the lines and damage to equipment, operator Network Rail said.

“We cannot continue to run trains with the levels of wind we are seeing,” spokesman Nick King said.

Some flights from Glasgow, Edinburgh and Aberdeen airports were also being cancelled because of the weather conditions.

Police advised drivers in most of Scotland to avoid travelling.

A lorry driver was killed when his vehicle toppled onto a number of cars in West Lothian, a county near Edinburgh, police said.

At least two other people were injured by falling trees.

Britain’s Meteorological Office said it had recorded a gust of 142 mp/h (228 kilometres per hour) in the mountains of Inverness-shire, Scotland, while there were widespread winds of between 60 and 80 mph in populated areas.

Scottish Power said 20,000 homes are without electricity in central and southern Scotland. In Northern Ireland 6,500 homes were left without power. [AFP]