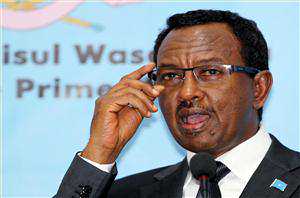 Somalia’s prime minister Abdi Farah Shirdon has been voted out of office just over a year after assuming post amid disagreement with country’s president, Hassan Sheikh Mohamud.

Announcing the result of the vote, the speaker of the Somali parliament, Mohamed Osman Jawari, said on Monday that 184 MPs out of 250 present voted for the impeachment motion.

The disagreement was over the selection of members of the cabinet, which was scheduled to be reshuffled.

The MPs had been debating the no-confidence motion against Shirdon for the past two days. More than 165 MPs had signed the motion, which was brought to parliament on Saturday.

Shirdon, a newcomer to politics like the president, held the prime minister’s post for just more than one year.

Previous Somali governments have been plagued by infighting between presidents and prime ministers. Shirdon is the fifth prime minister in six years Somalia has had.

Shortly before the speaker of parliament announced the results of the motion, Shirdon held a press conference in the Somali capital, Mogadishu, where he said: “Some ministers in the cabinet are behind the current political instability. They think the prime minister could be easily ousted, so they could keep their positions.”