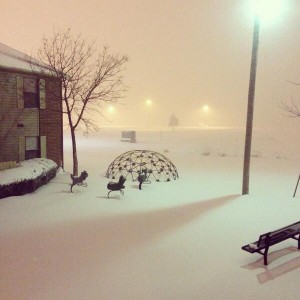 A storm with a 3200km footprint has hit the US with freezing rain, ice and snow to flooding, thunderstorms and even tornadoes.

Some of the millions of people who hit the roads and airports by midday today squeaked through before any major weather had hit, but the cancellations and flight delays started to mount as the afternoon wore on.

Forecasters warned motorists that roads that seemed passable one minute could turn treacherous the next, as a cold blast on the storm’s back end turns rain to ice and snow.

Known as ‘Gemini’, the system’s strange swirl of winter and spring-like conditions produced starkly different weather at times. While drivers in Oklahoma and eastern Missouri were navigating ice-slicked streets, residents in Memphis, Tennessee, were strolling around in T-shirts in spring-like temperatures in the mid-60s.

Nationwide, nearly 500 flights had been cancelled and more than 7,000 were delayed, according to aviation tracking website FlightAware.com. Most of the disruptions were affecting flights in and out of airports that serve as major hubs, including Chicago’s O’Hare, Houston’s Bush International, Dallas/Fort Worth and Denver International.

A 16-year-old boy died after his car crashed and overturned on U.S. 64 near Tulsa, according to the Oklahoma Highway Patrol. And Oklahoma City police said a woman was killed Friday night in a collision on a slick roadway.

If there is a silver lining for the estimated 94.5 million Americans who were planning to travel by road or air during this holiday season, which runs from Saturday through New Year’s Day, it’s that Christmas happens midweek this year, AAA spokeswoman Heather Hunter said.

“When a holiday falls on a Wednesday it gives travellers more flexibility of either leaving the weekend before, or travelling right before the holiday and extending the trip through the following weekend,” Hunter said.