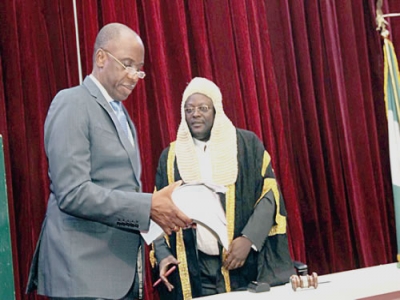 The Rivers State chapter of Peoples Democratic Party (PDP) has warned banks and other financial institutions in the country not to deal with the administration of Governor Rotimi Amaechi as it concerns the 2014 appropriation Act recently passed into law by the State House of Assembly.

The party insisted that the passage into law of the 2014 budget outside the legislative chambers of the State House of Assembly by pro-Amaechi lawmakers remained illegal, null and void, and was of no effect.

The lawmakers had passed the 2014 budget inside the old auditorium of Government House, Port Harcourt, which they converted to a “makeshift chamber” until the House of Assembly complex is reopened by the police.

The PDP, in a statement signed by Jerry Needam, special adviser on media to the state chairman, Felix Obuah, described the budget as illegal and said any financial institution doing business with the state government on the basis of the 2014 budget, was doing so at their own risk.

The statement reads in part; “Governor Amaechi cannot have any other reason for the gross disregard for the Supreme Court judgement on the illegality and nullity of a state legislature to conduct its proceedings outside the constitutionally approved chamber, than to access more state funds to sponsor the All Progressives Congress (APC).

“To show how desperate Amaechi is about frittering away the state resources because of the people’s stiff opposition to his style of leadership, he has also continued to ask for another N100 billion loan besides the over a trillion naira already collected.

“This has proved that we are not just crying wolf that the state is broke despite Amaechi’s shameless denials, yet he is leaving no stone unturned in grabbing monies belonging to the state from all sources. We shall continue to stand against this broad-day roguery because we are all stakeholders and cannot remain silent in the face of this daring provocation by Amaechi and a few lawmakers and persons who are encouraging him so as to line their own pockets”.