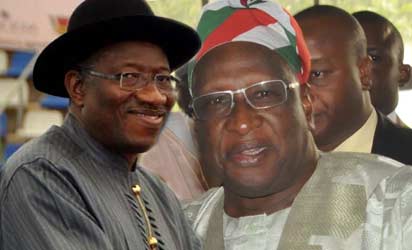 Unlike the case of the proverbial Prophet that has no honour in his hometown, embattled National Chairman of the Peoples Democratic Party, PDP, Alhaji Bamanga Tukur has received support from Elders, Leaders and Stakeholders Forum, Adamawa State PDP chapter, as they have pleaded with President Goodluck Jonathan not to sack him.

The Forum noted that those calling for Tukur’s head were doing so for selfish reasons adding that should they succeed in their plot, the already volatile political situation in the ruling party will take a turn for the worse.

Condemning the vote of no confidence passed on Tukur by other members of the National Working Committee, NWC, at a meeting with Mr. Jonathan at the presidential villa on Thursday night, the Adamawa State PDP stakeholders and elders, warned that the removal of the national chairman and the politics of his replacement would undoubtedly open up other wounds in the party that would be difficult to heal.

A statement signed by former Adamawa State governorship aspirant, Dr. Umar Ardo on behalf of the leaders and stakeholders, read: “As members of the Adamawa State PDP’s Stakeholders and Elders we condemn in very strong terms the so-called vote of no confidence purportedly passed on the National Chairman of the PDP, Alhaji Bamanga Tukur, by some members of the NWC of the party.

“We also disagree with their reasoning in calling on President Goodluck Jonathan to drop his support for the National Chairman.

“We recall with grave concern the same antic employed by the same members of the NWC, then led by Prince Olagunsoye Oyinlola, to so-called reverse the dissolution of the Pro-Nyako-led Kugama EXCO in Adamawa State last January.

“We view the current act as another attempt by the same reactionary forces that then tried to undermine the political standing of the National Chairman and in the process almost wrecked constitutionalism in our party affairs.

“The same forces are at it again, trying to create needless constitutional crisis for the party in an election year on the altar of self-ego of the opponents of the National Chairman. It is a well-known prophetic saying that a house divided against itself will surely fall.

“We, therefore, plead with the President to see the current action of the members of the NWC as an act principally aimed at dividing the house and not uniting it. They failed then on Adamawa, they will fail now too, on Nigeria.

“We further call on the president to also take account of the fact that the central opposition to the PDP is coming from the so-called Hausa-Fulani core North, to which Bamanga belongs, many of whom are still holding on to the PDP on account of Bamanga’s leadership.

“The removal of Bamanga and the politics of his replacement will undoubtedly unlock several chains of events the final outcome of which no one can fathom for the party.

“Those who left the party did not do so on account of Bamanga but on account of their own peculiar irreconcilable local politics in their constituencies. Bamanga becomes only a convenient excuse for them”.