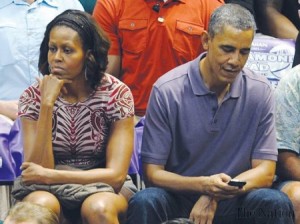 Rumors of a divorce between Barack and Michelle Obama have set the Internet abuzz. Here’s everything you want to know about the new Obama divorce rumors which have suddenly become the hottest news on the internet. The information below is based on Jan. 19 news reports from Inquisitr.com, The Nation, The Daily Star and other media outlets reporting on the alleged Obama marital strife as viewed by The Examiner.

Here are the key points associated with the latest Obama divorce rumors, including two alleged cheating episodes by Barack Obama and the brazen flirting which angered Michelle Obama to the point that she reportedly wants a divorce.

Divorce Already in the Works

Michelle Obama has already secretly met with an attorney to work out the logistics of filing for a divorce in which she will pursue a divorce settlement in which will include half of Barack Obama’s assets.

When Barack Obama’s presidency is over, he will reportedly move back to Hawaii where he grew up. Michelle Obama and the couple’s two teenage daughters, Sasha and Malia, will remain in Washington D.C. This is not the first time the Obama’s have been the subject of divorce rumors. However, this time the divorce rumors have a slightly different twist.

During the Obama’s Christmas break in Hawaii, someone is said to have leaked information to Michelle Obama about the Secret Service covering up Barack Obama’s alleged extramarital affairs.

In one incident, Barack was reportedly caught with a woman in an incident that was quickly hushed up by the Secret Service.

In a separate incident, a Secret Service agent was said to have seen Barack Obama in a compromising position with another woman while Michelle Obama was out of town. These new allegations of infidelity have revived interest in previous reports of Michelle Obama’s jealousy and the infamous rumor of the Barack Obama-Vera Baker affair.

Prior to finding out about Barack Obama’s alleged infidelities, Michelle Obama was allegedly already angry that Barack Obama embarrassed her by taking selfies at Nelson Mandela’s funeral with the beautiful blonde the prime minister of Denmark, Helle Thorning-Schmidt while Michelle gave them an icy stare. The first lady later changed seats, putting herself between Barack Obama and the attractive blonde. The whole incident was caught by photographers and pictured of the incident went viral on the Net.

According to the rumors, the Obamas fought about the incident during their Christmas break in Hawaii and things came to a head when she found out about the Secret Service covering up Barack’s extramarital affairs.

This was reportedly the real reason Michelle Obama refused to return to Washington with Barack and the couple’s daughters. They flew back without Michelle, who remained behind and spent more than a week at Oprah Winfrey’s Hawaiian estate with friends.

The official story that Michelle’s extended stay in Hawaii was a birthday present from Barack Obama. The White House press secretary commented “If you have kids, you know that telling your spouse that they can go spend a week away from home is actually a big present

Anonymous White House sources claim that the first couple have already separated. For the sake of outward appearances, Michelle Obama will reportedly continue living at the White House until Barack Obama’s current term of office ends, but she will lead a separate life. The first lady has reportedly already moved out of the presidential bedroom and into another bedroom in the family’s private living quarters. Other sources report that Michelle Obama has already made arrangements to remove Barack Obama’s belongings from of their Chicago home.