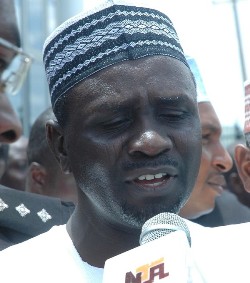 A former Governor of Kano State, Malam Ibrahim Shekarau, who defected to Peoples Democratic Party, PDP, from All Progressives Congress, APC, on Wednesday, is on his own, 11 members of the House of Representatives from Kano, under the platform of APC have said.

This is just as Senator Kabiru Ibrahim Gaya said he had earlier pleaded with Shekarau not to leave the APC because that is where he belongs.

“He left contrary to the advice of his people. He is alone and he is on his own because nobody went with him. Only one member of the State House of Assembly followed (him). All of us in the National Assembly are in the APC”, Gaya said.

Gaya also said he was too “big” to follow Shekarau to the PDP because Shekarau met him in the defunct ANPP.

“May be he (Shekarau) likes being in the opposition because soon PDP will become opposition in Nigeria”, Gaya added.

At a news conference in Abuja yesterday, the Kano APC Reps caucus also re-affirmed their allegiance to APC.

“We wish to make it categorically clear today that, we are not leaving the APC for any political party. We have sacrificed a lot and have come a long way in the struggle to emancipate our people from the bondage of PDP misrule,” the Kano APC Reps caucus said at a news conference in Abuja yesterday.

However, they urged the APC leadership to remain transparent and provide a level-playing field to all party members.