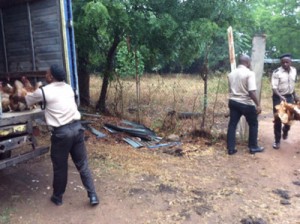 Deputy Governor of Enugu State, Mr. Sunday Onyebuchi has described the evacuation of his poultry from his official residence in the Government House by officials of the Enugu Capital Territory Development Authority, ECTDA and Ministry of Environment as a wicked act and a clear exhibition of impunity by a power-drunk official of the government.

Speaking, Tuesday, on the evacuation of the 3,000 birds from his official residence and the statement by Governor Sullivan Chime’s Press Secretary, Mr. Chukwudi Achife on Monday, which claimed that the poultry constituted a health hazard to people working in the Government House, Onyebuchi said those behind the act were hiding their actual motive.

He said that he was surprised that the statement from the government did not mention the alleged violation of the purpose clause in the Certificate of Occupancy for the Deputy Governor’s lodge as claimed in the two letters earlier sent to him from the office of Chief of Staff to the Governor.

“Violation of Purpose Clause which they claimed was the basis for their action was not mentioned in the press statement. The two letters which alleged violation of purpose clause of the C of O of the premises was dropped in the statement issued from the governor’s office on Monday.

“In the two letters they wrote to me on December 24 and 27, 2013 which I replied, they made mention of the Environmental or health hazard emanating from the poultry. In their press statement they claimed that they wrote me and asked me to clean up the place and I refused. So let them produce a letter asking me to do that. It is not true,” he said.

The Deputy Governor recalled that in his reply to their letters, “I told them that the poultry area was designated Agriculture Unit and I want them to deny that the structure had been used as poultry before I became Deputy Governor.

“Let them also deny that I have not operated the poultry since 2008. And that is why I put in my Asset Declaration at the end of my first term in office and at the beginning of the current term that I have operated the same poultry and this was verified by the Code of Conduct Bureau. How suddenly my poultry became a health hazard when it has been in existence since 2008?”

Onyebuchi said that the action of the official which was shocking to him, was intended to humiliate him and show how “politically impotent” he was.