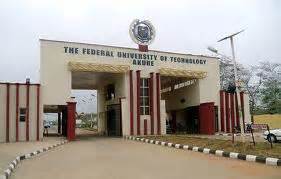 A paper authored by a team from the Federal University of Technology Akure, FUTA, has been adjudged the best presentation at the 8th International Conference for Internet Technology and Secured Transactions (ICITST-2013) held in London, United Kingdom, in December 2013.

Entitled DGM Approach to Network Attacker and Defender Strategies, the paper, which was presented by Dr Kayode Alese, was co-authored by himself, Iwasokun Gabriel Babatunde and Haruna Danjuma Israel (all from the Department of Computer Science, FUTA), beating 1,241 papers received from 96 countries to emerge the overall best according to the panel of assessors.

The paper, which was later adjudged as the best for the year 2013, dwelt on novel strategies to checkmate infiltrations of secured transactions on the information super highway. A lot of uplifting remarks from the international faculty went in favour of the ambassadors of FUTA who presented the award-winning paper.
Alese, who is the current Dean of Students Affairs, said the general consensus at the conference was that FUTA showed great strength in global competitiveness through excellence in technological advancement, learning and research. [Vanguard]