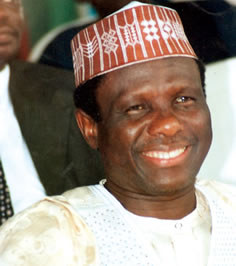 The Peoples Democratic Party (PDP) chieftain said the Middle Belt region voted massively for Jonathan in 2011, adding that the region would do repeat the feat again and was ever ready to give the president their total and unalloyed support.

Speaking in Jos, Plateau State yesterday at a sensitisation workshop on the rights of ethnic minorities in the North, organised by Stefanos Foundation and funded by Gatestone Institute, Gana said the Middle Belt would be holding an ethnic nationalities conference next monthto articulate the position of the northern minorities, before the convocation of the proposed national conference.

The former Minister of Information said, “The region is only waiting for President Goodluck Jonathan to declare his intention to run for the 2015 Presidential Election and we will give our total and overwhelming support to ensure that he is returned re-elected.

“We will not go ahead of him; we will wait for him to declare. And once he declares, we will mobilise again and give him all the necessary support he needs to win again in 2015. We’re ready, but we are not promoters; we are strong supporters. Once he declares, the leaders of the Middle Belt will meet and we will let our people know. The issues are very clear, and I know they would do it again”.

Gana said it was good that the president had not yielded to pressure to declare his intention to contest in 2015, stressing that “democracy is not just about elections; when you elect a government, you should have a period to allow the government to perform, to do the work, to deliver the dividend of democracy to the electorate.

“We advised him, that he should not bother himself now with announcing it. If he does, it will look like democracy is all about election. It is about development, excellent service, good government, and good economy”.

He added that the president needed to be given time to fulfil his electoral promises to the people.

Share
Facebook
Twitter
WhatsApp
Previous articleObasanjo Attacking Me Due To His Perceived Loss Of Political Relevance In S/West, Says Kashamu
Next articlePDP Not Under Threat In Kaduna, North-West Zone, Says Sambo
- Advertisement -