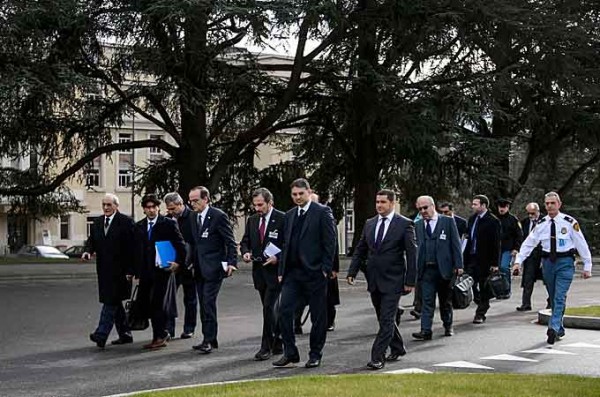 It was expected to end Syria’s three-year-old war, although no one expected peace to come very easily, but the first round of peace talks aimed at ending the civil war in the middle east nation has ended without any significant breakthrough, as rival sides blamed each other for lack of progress.

United Nations Arab League envoy to Syria, Lakhdar Brahimi, said on Friday that while talks between Syria’s regime and opposition had made slim progress, they had raised hopes for a solution to the country’s civil war.

Brahimi said he saw some positive steps and common ground, but that the gaps between the sides remained wide.

Brahimi said that the opposition delegation would be back on February 10, but President Bashar al-Assad’s delegates had told him they would have to check with Damascus before agreeing to return.

He listed 10 simple points that he felt the two sides agreed on in the talks and said he thought there was more common ground than the sides recognised.

But neither side has budged an inch from their main positions: the opposition wants the talks to focus on a transitional administration it says will remove Assad from power. But the government wants to talk about fighting “terrorism” – a word it uses to refer to all armed opposition groups.

The sides also failed to achieve more modest aims, such as an agreement to allow aid convoys into Homs, Syria’s third largest city, where thousands of civilians are trapped with no access to food or medicine.

According to Syria’s opposition spokesman, Louay Safi; “There is no way there could be progress without establishing a governing transitional body with authority to deal with political and military matters.”

Expectations had been low for a breakthrough on political issues at the talks, the first between Assad’s representatives and opposition groups in an almost three-year-old conflict that has killed 130,000 Syrians and driven a third of the population from their homes.

“Progress is very slow indeed, but the sides have engaged in an acceptable manner,” Brahimi said. “This is a very modest beginning, but it is a beginning on which we can build.”

Syrian Foreign Minister Walid Muallem, said there had been no “tangible results” for two reasons: the lack of seriousness from the opposition, namely its earlier threats to withdraw, and its insistence on focusing on one issue.

The second reason was “the negative and tense atmosphere that the US created since the beginning of the conference” after Washington decided to arm Syrian rebels. Muallem blamed the US for “blatant interference”.

“We cannot talk about serious engagement from Assad’s representatives,” Jarba told reporters after end of negotiations.