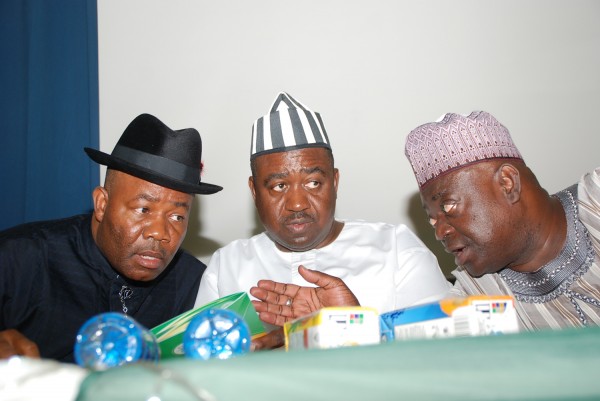 Benue State Governor Gabriel Suswam said yesterday that Tukur’s resignation was not discussed with the President.

According to him, issues concerning the states and how to resolve the party’s crises and bring back governors who defected to the All Progressives Congress (APC) were discussed with the president.

Suswam, who made this known while speaking with State House correspondents, said that the governors’ meeting with the president last night centered on issues concerning the dwindling fortunes of the ruling PDP, particularly the onerous task of winning back five members of the party that defected to the All Progressives Congress (APC).

“The issue discussed with the president was basically on how to re-strategise and re-position our party and how to move forward as a party. The second meeting is the national caucus and I am not in a position to comment on that; after the BoT meeting, the vice president will brief on the outcome”.

Asked if the issue of the chairman’s resignation was discussed,  Suswam said the vice president will comment on that after the BoT meeting, even as he insisted that, in the PDP governors’ meeting with the president, “issues like that was not discussed”.

“I think it’s the responsibility of the national caucus and the BoT, and the vice president will adequately brief you on the outcome”, the governor added.

Noting that the governors did not table any demand before President Jonathan, Suswam said, “It is not an issue of demand; we are just touching base with the president. The president is the PDP party man and so, from time to time, all PDP governors meet with him”.

On concerns raised at the meeting, he said: “The concern is that the fortunes of our party are dwindling and so we need to address that. How do we re-position our party to win the forthcoming elections in Ekiti and Osun? How do we win back our colleagues that have stepped aside? We don’t believe that they have left the party; they only stepped aside. These are the issues that were raised”.

Niger State governor, Muazu Babangida Aliyu, who chipped in some few words while the interview with Suswam was going on, stated that the five governors aggrieved governors who left the party would definitely return.

According to Aliyu, the G5 governors were just on the side-lines and that as soon as the party is restructured following ongoing effort, they would return.