Pope Francis is definitely one of the most outstanding Popes ever, he keeps surprising the world over with his unusual acts of kindness and modesty, but who knew the pope could be this cool? 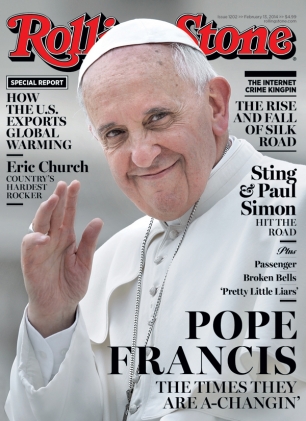 Pope Francis, who many have described as the Best Pope in recent times, is on the cover of the February 2014 issue of Rolling Stone Magazine.

This comes a few weeks after he was on the cover of TIME Magazine‘s December 2013 issue for being the Person of the Year.

As most of us know, Rolling Stone cover stars are mostly rock superstars and actors, so it is somewhat a great fete for the Pope.

The Times They A-Changin’ – reads the headline for his article and we can’t agree more. Not even Barrack Obama has gotten the “honour” of being on the cover of the publication.

It’s the 77-year-old icon’s status as a religious and cultural icon, who has not only been able to mix modesty, humanness and likeability but also has helped galvanize the Catholic faith, which is the focus of Mark Binelli’s profile.