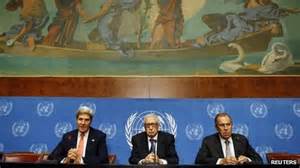 Syrian peace talks in Geneva appear to have taken a step forward after days of deadlock, as the government delegation announced its “full readiness” to discuss the issue of a political transition.

Negotiations stalled earlier this week as the opposition accused the government of refusing to talk about the Geneva communique, a 2012 document that calls for a transitional governing body in Syria.

Syrian state television said on Wednesday that the government delegation had announced its willingness to discuss the Geneva communique “paragraph by paragraph” during the so-called Geneva 2 peace talks in Switzerland.

“The Syrian government delegation announced its full readiness and since the beginning to put Geneva on the table and discuss it paragraph by paragraph from the first article,” a news bulletin said.

The opposition expressed optimism at the development.

“Today we had a positive step forward because for the first time now we are talking about the transitional governing body, to end dictatorship and end the fighting and the misery in Syria,” opposition delegation spokesman Louay Safi told reporters, adding he hoped for “more progress in the coming days.”

Safi said the government delegation had previously tried to focus the talks on “issues of terrorism” but was now willing to discuss the size, responsibilities and timeframe of a transitional body.

At a news conference on Wednesday evening, UN mediator Lakhdar Brahimi said the gap between the two sides remained “quite large,” and he did not expect any significant results from the first round of talks, scheduled to wrap up on Friday.

He expressed hope, however, that the second session would be more productive.

The two sides have been talking for close to a week in the strongest diplomatic push yet to end the country’s three-year-old civil war, which has killed more than 130,000 people and forced millions from their homes.