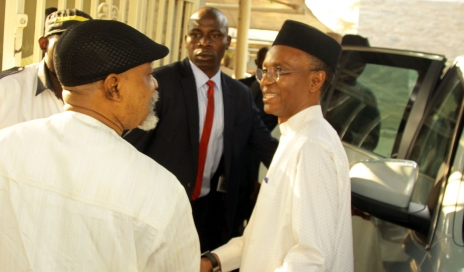 Contrary to reports in a section of the media that former Minister of the Federal Capital Territory, FCT, Malam Nasir El-Rufai, has been detained by the Department of State Security Services, DSS, after he honoured their invitation on Monday to clarify “an inciting statement” he allegedly made last week, Information Nigeria has learnt that he has since been released to go home and did not spend the night at the Yellow House building headquarters of Nigeria’s secret police.

El-Rufai, who is the Interim Deputy National Secretary of the opposition All Progressives Congress, reported at the SSS office at about 9.20am yesterday in company of Rivers State Governor, Rotimi Amaechi and Senator Chris Ngige after he engaged operatives of the security agency in a game of hide and seek last Friday.

El-Rufai, in an interview with reporters shortly before he entered the SSS office on Monday, explained that he did not honour the invitation earlier as there was no warrant for his arrest, adding that the SSS had no power to compel him to come to its office because of the statement he made.

He said, “The SSS has provided the Warrant of Arrest and shown it to my lawyer on Friday and I said to my lawyer that we will come here this morning (Monday).