Hours after the Presidency said the Federal Government was winning the war on Boko Haram “guerrilla warfare”, gunmen suspected to be members of the sect attacked Bama, a town 135 km from Borno state capital, Maiduguri. 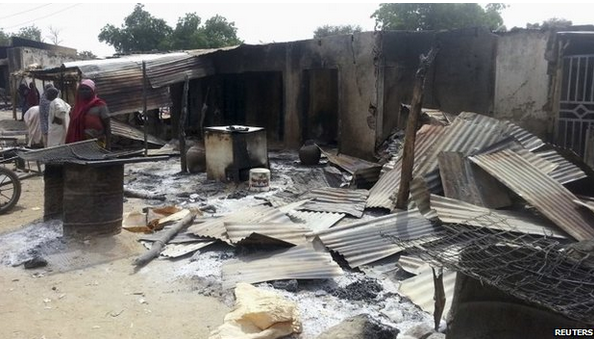 The army said that suicide bombers have probably taken part in the attack.

There was heavy exchange of gunfire between the insurgents and security operatives, but the the casualty figure is still unknown.

The residents of the state whose relatives in Bama sent distress calls before dawn said the attackers stormed the town at about 4 a.m.‬‬

“Many may have been killed because the attack was launched when the residents were fast asleep,” a Maiduguri resident whose relative contacted him from Bama said.‬

This is not the first time the northern border town of Bama attacked by suspected Islamists.

The attack comes 24 hours after the Senior special assistant to the president Dr. Doyin Okupe said that the Federal Government was winning the war on what he called the “Boko Haram guerrilla warfare”.

He added that Nigerian army is one of the best equipped in Africa.

Attacks have intensified
About 300 people have been killed this year alone by Boko Haram insurgents. Thousand have lost their lives since 2009.

Eleven people were killed by gunmen suspected to be members of the Boko Haram on Monday at Galga village in Ga’anda District in Gombi Local Government Area of Adamawa State.

In a Saturday attack on Izghe Gwoza Local Government Area of Borno 146 people were murdered.

The attacks continue despite the state of emergency imposed on Borno, Adamawa and Yobe states in May 2013.
Source: BBC News