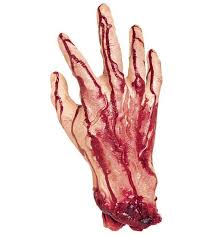 A Fulani herdsman has cut off the right hand of a farmer, Mallam Sani Abubakar who is a resident of Maduba Village of Zaki local government area of Bauchi state following a heated argument over grazing of cattle on his farm.

According to reports, the unfortunate incident occurred when the victim who happens to be the owner of the farm attempted to drive away the cattle from his farm, but his action angered the herdsman leading to a heated argument.

It was in the course of the heated argument that the herdsman used a cutlass in his possession and severed the right hand of Mallam Sani.

Narrating his ordeal to newsmen while recuperating at Hadeja General Hospital in Zaki local government, Mallam Sani said that on that fateful day, he discovered that some cattle belonging to a herdsman who is a son to one Alhaji Gainako Bayaro were grazing on his farm.

He said that the herdsman did not make any move to drive his flocks out of the farm and when he attempted to drive them away, it resulted to a heated argument between him and the herdsman.

“The herdsman hit me twice with the flat side of his cutlass and then struck again with an extra force that cut off my right hand from the wrist as I also had to protect my face from sustaining any futher injury. When he discovered the magnitude of his offence, he panicked and escaped. Although the herdsman is at large, the brother of the herdsman is in police custody to assist in tracing his whereabouts,” Mallam Sani said.

He demanded for justice and called on the state government to assist him financially as he is incapacitated at the moment.