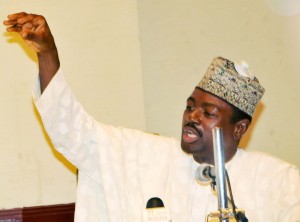 Politicians who have defected from the ruling Peoples Democratic Party to the opposition All Progressives Congress ahead of the 2015 elections have been described as nomads by the Minister of information and Supervising minister of Defence, Labaran Maku, adding that the party will become stronger without them.

Maku said this Wednesday, in an interview in Abuja, adding that as much as the PDP is not happy losing members, it is sometimes better to lose weight to gain strength as it is now happening in the party.

“I have always said, no party would be happy to lose their members to any party because every political party would wish that it is able  to retain all its members because number itself is good that no organization would want to lose its member so it is not something you will beat your chest and say you are happy when your members leave. But I have always made a point that sometimes you need to lose weight to gain strength and that is exactly what has happened in PDP.

“When a number of these people were leaving PDP, I said the party would be healthier in the long run. First of all, if you look at all the people that have left PDP, some of them are the people that have caused all the headaches in the party. They have been the ones attacking their party, they are very quarrelsome; they have oversized egos; some of them cannot stay under the same roof with anybody for one week without the top blowing up. A number of these people who left, if you take a look at the history of our party and look at their antecedent you will see that they are migrants, they keep migrating from one place to another. So party needs to have members that believe in its ideology, that settle down because they believe in the party. A party is not just a market for people to stand for election, but a number of people who are leaving see the party as a market place for election, a number of them will come in because they want to contest for election, but if they lose they run out.

“Political parties after 15 years of democracy in our country, we must begin to  settle down , let us know those who believe in the party, those who believe in the policy and programmes of the party, not because they have an electoral ambition , but because they want the party as a organization that would develop the society improve its policy , improve the country. Now as we grow older on PDP, we are beginning to see that after these people left, the party is gaining  some stability.

“You notice that the last one year, they have turned the party into object of ridicule, abusing the party; making it look so bad. Meanwhile all the parties they have gone to, none of them has a programme yet, none of them has  any ideological focus. The new parties they have run to, they have no registered members yet, they did not have convention. Even within this small period since some of these elements left the PDP they have caused significant problem in the new party they ran to. They are already causing a huge problem there.

“There is already an explosion in APC in Kano, because Kwankwaso went straight and took over a party he was not part of, and insist that he must be the leader, and sacked those who formed the party. You go to Sokoto again, Wamakko went immediately and hijacked the party from  those who formed APC in the place, who dissolved their own parties in order to form a political party that would compete with  the PDP.  These people went and hijacked the party took it away from them so even from the point of view of Justice, you were looking for democracy and you saw nothing wrong in going to another and hijacking the structure from them,” he said.