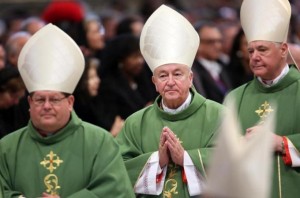 Pope Francis, who has made simplicity and serving the poor the distinguishing characteristics of his papacy, has told his first newly appointed cardinals to shun intrigue, gossip and cronyism.

“A cardinal enters the Church of Rome, my brothers, not a royal court,” the pope said during a mass attended by the 19 cardinals named on Saturday.

“May all of us avoid, and help others to avoid, habits and ways of acting typical of a court: intrigue, gossip, cliques, favouritism and partiality.”

The admonition came as Francis is seeking to refashion the image of the Roman Catholic Church, plagued by financial scandals and accusations of covering up child abuse by priests.

A council of cardinals, set up by Francis to advise him on Vatican reforms, on Tuesday heard a report to reform the Vatican bank and on Wednesday discussed organisational and economic programmes, the AFP news agency reported.

“We love those who are hostile to us, we bless those who speak ill of us, we greet with a smile those who may not deserve it,” the pontiff told the newest members of the College of Cardinals on Sunday.

“We do not aim to assert ourselves, we oppose arrogance with meekness, we forget the humiliations that we have endured.”

Later, addressing tens of thousands of people in St Peter’s Square for his Sunday blessing, Francis said Catholic leaders should not consider themselves holders of special powers or bosses, but place themselves at the service of the community. “They should be good servants, not good bosses,” he said.

Sunday’s mass was held after a meeting of cardinals from around the world, known as a consistory, to discuss family issues on Thursday and Friday.

Nine of the 19 new cardinals come from South America, Africa and Asia, a decision that Vatican observers say should help correct a perceived bias towards European cardinals.

Francis chose not to move into the official Vatican apartments reserved for the head of the Church after he took over almost a year ago, a sign of his emphasis on simplicity.