Sportswear giants, Adidas, who are the official kit company for the Eagles, recently launched the new home jersey and according to them: “the Super Eagles will pull on their new 2014 World Cup kit for the first time against Mexico in a friendly billed to hold in Atlanta, USA on 5 March”.

Displaying the new jersey via his twitter account today, Udoh tweeted: I tried out the new # SuperEagles jersey courtesy of @adidasNG. What do you think? 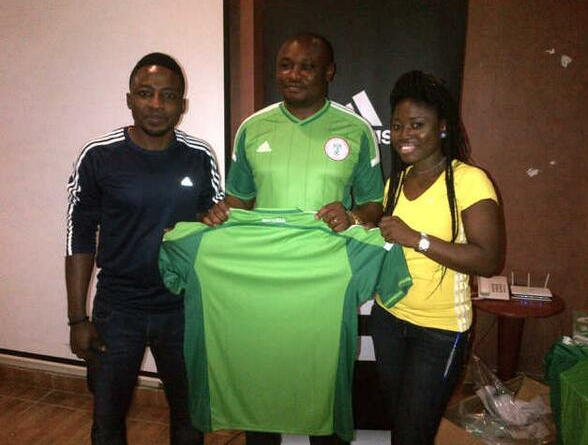 The new jersey departs from the traditional racing green to an exciting and striking lighter variant, reflecting a fresh, young and vibrant Super Eagles team that carries the hopes of a proud Nigerian nation.

Speaking at the launching on Friday, Nigeria Football Federation president, Aminu Maigari remarked: “We are very proud to once again partner with Adidas to produce a home jersey that reflects youth, spontaneity and freshness. It will not only appeal to the Super Eagles but their fans across the globe. We are delighted with the design as it reflects innovation yet incorporating an element of fun.

“We are happy though that while the jersey has a new look, it’s green side panels tie the new kit to its’ historic darker green tradition.”

Red is surprisingly the colour of choice for the name and number treatment, on the white away kit.