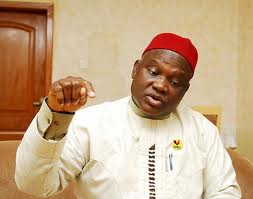 Immediate past governor of Abia State, Dr. Orji Uzor Kalu has received knocks from Chief Chekwas Okorie over his recent comment that the leadership of Ohaneze Ndigbo, the Igbo apex socio-cultural group, has pleaded with him not to contest the 2015 presidential elections.

Okorie, who is the National Chairman of United Progressive Party, UPP, questioned the political value of the former governor at the just concluded Igbo International Colloquium in Enugu.

He argued that there is no country in the world where a cultural group can dissuade anyone from pursuing their political ambition, adding that both Kalu and Ohaneze should reappraise their political calculations and know whether they were not embarrassing themselves.

He said “I don’t want to join issues with Kalu and Ohaneze on Ndigbo ceding the presidency to Jonathan, I have never seen anywhere in the world where a cultural group will decide whether to go for the highest political office in the country or not.

“Orji Uzor Kalu should access his political value to Ndigbo for which he will come and tell us that a cultural group said he should not run and therefore that is why he is not running.

“This same statement that was made public by Orji Uzo Kalu is now hunting him. Did you see him at the Colloquium? He didn’t attend because he was afraid of meeting Ndigbo, the same people he is supposed to be their president general. Go to the social media and see how he has brought the Ohaneze presidency to the dust because of one careless political statement”.

Okorie further stressed that he is one of the five living old members of Ohaneze when it was first known as Igbo Unity Forum in 1976 and three years later when it became known as Ohaneze, adding that he has never seen Kalu attend any of the group’s meetings.

“So it becomes a misnomer for someone who has never been part of an Igbo umbrella body to sit at the comfort of his house and begin to obey instructions giving by another young Igbo President-General, who incidentally is the youngest president general we ever had.

“This is a man so much was expected of in terms of radicalism, progressivism and pragmatism yet this same man is giving this impression; perhaps there is some other thing that is controlling his mental faculty.

“That is what is going to happen and if for no other reason; it is to restore the visibility of an Igbo man as a stakeholder in the Nigerian project.

“We say if you go to an Olympic games and your country’s flag is not flying, you will feel humiliated, but that you didn’t win gold, silver or bronze medal is a different thing. Non participation is humiliating”, he said.