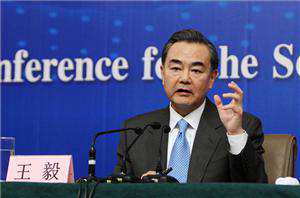 China has declared a “red line” on North Korea, saying it will not permit chaos or war on the Korean peninsula, and that denuclearisation is the only way to achieve peace.

China is the most important diplomatic and economic supporter of North Korea, a country largely isolated as it faces UN sanctions for refusing to abandon its atomic bomb programme.

However, Beijing’s patience with Pyongyang has been wearing thin following three nuclear tests and numerous bouts of sabre rattling, including missile launches.

The last of such incidents took place on March 7, when China voiced “deep concerns” to North Korea following reports that a missile launched by the latter passed by a Chinese civilian plane, according to a Reuters news agency report.

“The Korean peninsula is right on China’s doorstep. We have a red line, that is, we will not allow war or instability on the Korean peninsula,” Chinese Foreign Minister Wang Yi told reporters on Saturday, on the sidelines of China’s annual largely toothless parliament.

Wang called upon all parties to “exercise restraint”, adding that “genuine and lasting peace” on the peninsula was only possible with denuclearisation.

US Secretary of State John Kerry visited China last month and said after talks in Beijing that China and the US were discussing specific ways to press North Korea to give up its nuclear programme.

North Korea has forged ahead with its nuclear development after declaring the so-called six-party talks dead in 2008, overturning its commitments made under a 2005 disarmament deal aimed at rewarding it with economic incentives.

Wang reiterated China’s calls for a resumption of the talks between North Korea, South Korea, the US, Japan, Russia and host China.

“Confrontation can only bring tension, and war can only cause disaster,” Wang said. “Some dialogue is better than none, and better early than later.”

China has rejected what it said was “unreasonable criticism” of Beijing in the UN report, but has not said directly whether it would veto any proceedings in the Security Council to bring Pyongyang to book.