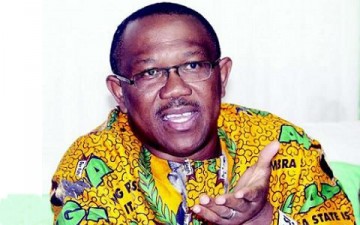 Governor Peter Obi of Anambra State has described as a figment of imagination, some media reports that he was being considered for either the post of Secretary to the Government of the Federation, SGF, a minister or an ambassador.

Obi’s eight year tenure as governor comes to an end next Monday when he hands over power to the governor-elect, Chief Willie Obiano.

A statement in Awka, the state capital yesterday by Obi’s Senior Special Assistant on Media and Publicity, Mr. Valentine Obienyem, said the epidemic of speculations surrounding the governor’s next move was understandable, but insisted, however, that his boss’ only wish was to hand over successfully, having taken the Southeast state from grass to glory and from a state that was synonymous with bank robberies to one that had not witnessed any bank robbery in four years.

Obieyem said: “As you are aware, Obi is still the governor of Anambra State.  His major concern is to finish strong.

“Associating any federal appointment with him is speculation and rumour-mongering and should be treated as such”.

According to him, whatever would “happen to the governor after his exit from Awka Government House is God’s wish”.

The media aide said what should be the people’s concern was how the governor would end successfully and support the in-coming administration for the good of the state and not planting seeds of discord through baseless rumours.