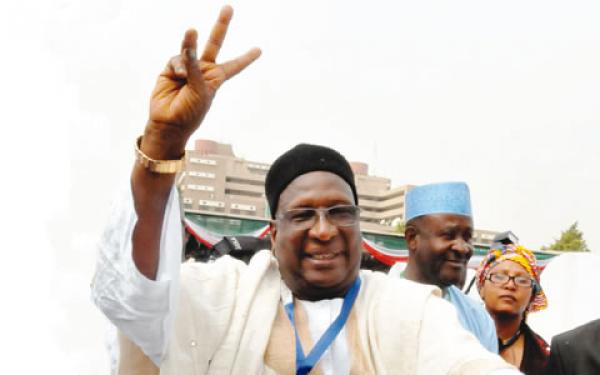 Immediate past chairman of the Peoples Democratic Party (PDP), Alhaji Bamanga Tukur and his wife, Hajia Fatimah Tukur have been conferred with the title of Ezigbu anyi Ndigbo of Nigeria by the Igbo Speaking Community of Lagos State.

At a ceremony held at the National Stadium, Surulere, Lagos, Tukur and his wife were said to have been conferred with the traditional titles in recognition of their humanitarian support for Nigerian people.

In his address, the President General, Igbo Speaking Community of Lagos State, Chief Ebere Ubani said though, the gathering despite being non-political, have sustained the ideology of rewarding outstanding Nigerians in whatever fields of endeavour.

“On annual basis, the Ndigbo community in Lagos State does gives out awards to different personalities who are believed to have made tremendous impacts on the lives of Nigerians. This year, we are recognising Alhaji Bamanga Tukur for his exemplary leadership and the entrenchment of rule of law while holding sway as the National Chairman of Peoples Democratic Party (PDP)”, Ubani said.

In his response, the former PDP chairman expressed appreciation at the gesture but stated that it did not come as a surprise to him, because he is a detribalised Nigerian and has always rendered assistance to Ndigbo.

“I believe all these honours coming from different parts of Nigeria is an attestation to the fact that I am a detribalised Nigerian. I recount that in my service to the nation I have given succour and salvation to greater number of Igbos dead or living”, Tukur said.