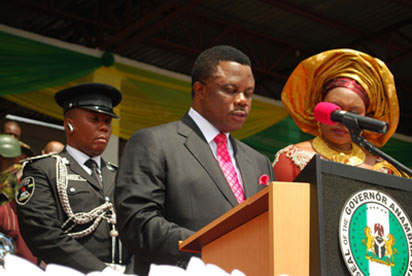 Newly sworn-in Anambra State Governor, Willie Obiano on Tuesday, in Awka, the state capital, performed what could be termed his first official duty as he inaugurated Mr Oseloka Obaze as Secretary to the State Government following his retention in that position from the previous administration.

He also inaugurated Professor Joseph Asike as his Chief of Staff, and Mr Willy Nwaokoye as the Principal Secretary to the governor.

Speaking at the ceremony, Gov. Obiano expressed confidence in the appointees, who he described as capable hands that have made their marks in their individual private careers, and would carry out their tasks dutifully.

“The task ahead is huge, we need the best of hands and I believe they will deliver”, the governor said.

Responding on behalf of his colleagues, Obaze thanked the governor for the honour done them, saying they would work to meet his expectations to surmount the challenges of governance in the state.

The oaths of allegiance and office were administered on the appointees by the Solicitor-General of the State, Mrs Tina Emekekwue.