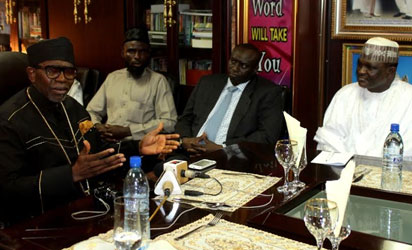 Major Hamza Al-Mustapha, former Chief Security Officer to late head of state, General Sani Abacha, has attributed the current unrests in the country to institutional decay, saying only institutional revolution would restore sanity in the system.

He spoke yesterday evening during the secon Christian/Muslim interactive engagement on Peace, Unity and Justice organised by the President of Christian Association of Nigeria, Pastor Ayo Oritsejafor.

On the occasion, Pastor Oritsejafor stated that with Muslims and Christians resolving to tolerate and respect each other’s faith, the ongoing national conference had great potentials of providing lasting solutions to the problems bedeviling Nigeria.

Al-Mustapha, who was at the one-day conference, at the invitation of CAN, stressed that people had to understand that the country was not like it used to be when some disgruntled elements used religion to cause problem and got away with it.

He said, “Nigeria is indeed sick and it did not start today. Our faith speaks and that is the anchor point. Our problem is that of mutual suspicion, lack of understanding and in a way, greed, naira speaks.

“Whether we like it or not, Nigeria deserves institutional revolution for it to be. Revolution in what sense? Tolerance, knowledge, understanding, statemanship, commitment and honesty irrespective of who and where. We must learn to speak the truth, it does not matter who is involved”, he said.

While expressing satisfaction with the ongoing national conference, Oritsejafor said Nigerians were all pursuing justice, equity, love and understanding “which will ultimately usher in lasting peace in Nigeria”.

He also said having a clear understanding of the wrong perceptions on how Muslims or Christians view each other with a view to taking the correction that “we are one”, would go a long way to put the country back on track.