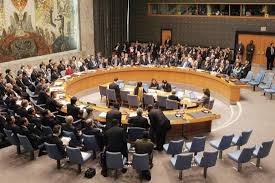 Nigeria was among the 13 countries that Saturday voted for a UN Security Council resolution asking countries not to recognise Sunday’s referendum in Ukraine’s Crimea region.

The resolution however failed as it was vetoed by Russia, a veto wielding member of the Security Council, while China, another world power, abstained. The resolution was drafted by the US and supported by the European country members of the 15-member council.

It declared that a planned referendum on the status of Ukraine’s Crimea region had no validity, and urged nations and international organisations not to recognise it.

In her explanation after the vote in New York, Nigeria’s Permanent Representative to the UN, Prof. Joy Ogwu, warned of the consequences of the referendum, which would transfer control of the Crimea region from Ukraine to Russia.

In a statement e-mailed to the News Agency of Nigeria (NAN) in Abuja, Ogwu said Nigeria voted in favour of the draft resolution because it reflected the principles embodied in the UN charter.

“The UN charter obliges all states to refrain in their international relations from the threat or use of force against the territorial integrity or political independence of any member state. The UN charter also obliges states to settle their disputes through peaceful means, all through the crisis in Ukraine.

“Nigeria has consistently and unequivocally called on all concerned to abide by these principles in the interest of international peace and security,” she said.

Ogwu said the resolution, which is not country specific, underscored universally agreed principles and the sanctity of international law mentioned in the 1994 Budapest memorandum.