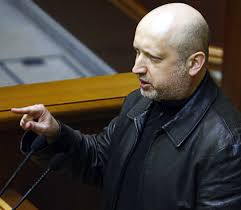 Ukraine’s acting president warned Crimea’s Kremlin-backed leaders they had only three hours to release the captured head of the splintered ex-Soviet country’s navy or face “an adequate response”, as NATO called Russia’s actions in Ukraine the gravest threat to Europe since the Cold War.

Pro-Russian forces had earlier seized two Crimean navy bases and detained Ukraine’s naval chief as Moscow tightened its grip on the flashpoint peninsula despite Western warnings that its “annexation’’ would not go unpunished.

NATO’s secretary-general Anders Fogh Rasmussen said Russia’s intervention in Ukraine posed the most serious threat to Europe’s security since the end of the Cold War and warned Moscow it would face international isolation.

“This is a wake-up call,” said Mr Rasmussen. “For the Euro-Atlantic community. For NATO. And for all those committed to a Europe whole, free and at peace.”

There had been crises in the Balkans in the 1990s and in Georgia in 2008, ”but this is the gravest threat to European security and stability since the end of the Cold War,” he said.

He demanded Moscow halt all military activities against Ukraine and seek a peaceful dialogue with Ukraine’s government.

“Any attempt to justify the annexation of Crimea through a so-called referendum held at gunpoint is illegal and illegitimate,” he said.

The local prosecutor’s office said Ukraine’s navy commander Sergiy Gayduk – appointed after his predecessor switched allegiance in favour of Crimea’s pro-Kremlin authorities at the start of the month – had been detained on suspicion of “ordering
Ukrainian military units… to open fire on peaceful civilians”.

Admiral Gayduk’s capture delivered a huge blow to efforts by the new team of untested pro-Western leaders in Kiev to impose some authority in their crisis-hit country in the face of an increasingly assertive Kremlin.

Ukraine’s acting president Oleksandr Turchynov scheduled an urgent security meeting and issued a statement around 6:00pm (3am AEST) giving the Crimean authorities until 9:00 pm (6am AEST) to release the commander and other “hostages”.

“Unless Admiral Gayduk and all the other hostages – both military and civilian ones – are released, the authorities will carry out an adequate response… of a technical and technological nature.”

Defence ministry officials earlier said that Russian forces had seized a second military base in Crimea’s western port town of Novoozerne after using a tractor to ram open its main gate.

Women and children led the Russian take-over, the deputy commander told AFP, as some 50 servicemen were seen leaving with their heads bowed in the second such seizure.

“The self-defence militias came first, women and children marching in front of them, and the Russian soldiers behind,’’ Viktor, who did not give his surname, said from the occupied base.

“The Ukrainian soldiers, who were armed, did not react. The base is completely under Russian control, but the arms depot is guarded jointly by Ukrainians and Russians now,” he said.

The events at the Novoozerne base in western Crimea mirrored a similar seizure of the main navy headquarters in Sevastopol, home to Russia’s Black Sea Fleet, in the south of the peninsula.

Ukraine’s navy said women were first to enter the base in that take-over, after Ukraine on Tuesday authorised its military to use their weapons as “self-defence’’ following a killing in Simferopol of one of their soldiers – the first death in the stand-off.