A bus loaded with cartons of 30,000 pieces of live cartridges but concealed with tubers of yam and bags of yam flour was on Tuesday, March 10 been seized by the Nigeria Customs Service. 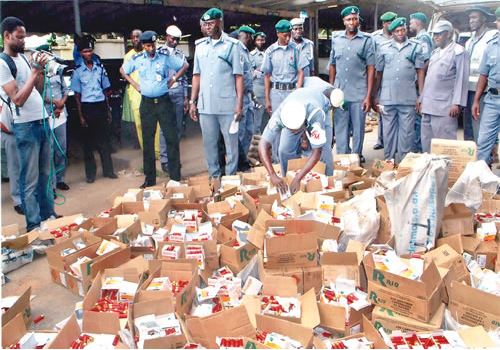 But the customs officials working along Saki-Ago Are, led by Superintendent of Customs A. Okoi, proved that they were well-trained, as their eagle eyes caught the conveyer of the unwholesome products while the men alleged to be the owners fled on sighting the customs officials.

Speaking during a press briefing, the Area Controller, Mr Richard Oteri, said that the driver of the bus with registration number KW 286 SHH was intercepted in the early hours of Monday, March 10 in which the live cartridges were discovered. The driver, Adegoke Abdulrahman, was also arrested.

Crime Reports learnt that Saki town has routes that could be used to link other countries such as Republic of Benin, Togo Republic and Burkina Faso. Many illegal routes along the borders of the countries have been used to bring in arms and ammunition into Nigeria. Similar seizure of 56,750 live cartridges was also made by the area command on May 18, 2013 along same Saki route, Mr Oteri revealed.

Speaking with Crime Reports after the press briefing, the bus driver claimed that he was ignorant of the content of the bags, as he was just hired by the owners to convey them to Ibadan.

According to the indigene of Ago Amodu residing in Saki, both in Oke Ogun area of Oyo State, “on Monday March 10, I was at Ago Amodu town to get foodstuff for my brother’s child naming ceremony taking place in Lagos State on Tuesday. As some people were helping me to slaughter and cut the ram we wanted to use, I went to Oje Owode area where I saw two men. One was a Yoruba man while the other was Igbo.

“They told me they had goods they were taking to Ibadan, saying they vehicle with which they were conveying the goods broke down. I asked them the kind of goods they wanted me to convey and they said they  were bags of yam flour and tubers of yam. I told them I wanted to go and settle some things first but they urged me to  them follow and view the goods.

“They pleaded that I should collect N25,000 from them. We agreed on that and I left for Saki. By the time I returned, they had finished loading the goods and I was given N5,000 as advance payment, with them promising to pay me the balance when we get to Iwo Road area of Ibadan after they must have withdrawn some cash from an Automated Teller Machine. They told me the goods would be offloaded beside a petrol station at Iwo Road.

“I also picked four women as passengers before we proceeded to Ibadan. At Iseyin, one of the women said she wanted to buy drinks and bread, so I parked. That was where a patrol team of Nigeria Customs Service came to meet us. They demanded to know what was in the bus and I told them it was bags of yam flour and tubers of yam.

“The Igbo man came and told me to open up to them that there were 10 bags of rice and cartons of cartridges among the goods. I exclaimed in fear, telling him that I could not speak on what I did not know about. But he assured me that the customs officials only needed to be settled.

“When we got to the customs’ office, I relayed what the Igbo man told me and they asked me to follow them to their office. As we were going, I turned back and noticed that the owners of the goods had fled. Other passengers had also left. This is the first time I will be experiencing this kind of thing. I have never done it before.”