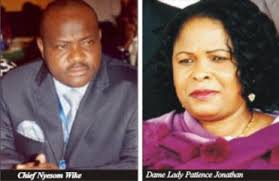 What looks like a significant boost to the ambition of the supervising Minister of Education, Nyesom Wike, to succeed his arch-political rival, Governor Rotimi Amaechi in 2015, came his way on Monday when the First Lady, Dame Patience Jonathan declared that she was solidly behind him.

Wike, who was once Amaechi’s Chief of Staff, but soon turned around to be his Achilles heel when the governor started having a running battle with President Goodluck Jonathan and his wife, has been tipped as the Peoples Democratic Party, PDP, governorship candidate for the state in the 2015 general elections.

But a report in a national daily today suggested that the First Lady had dumped Wike and has instead set her sights on getting the governorship candidate of the PDP from one of the riverine local government areas of the state, possibly Okrika, where she originally hails from.

The report also suggested that the president’s wife was scheming to install her favorites as the next governors of her husband’s state, Bayelsa, and Bauchi State in the North.

But Mrs. Jonathan, in a statement by her media assistant, Ayo Adewuyi, affirmed the supervising minister’s position as the leader of PDP in Rivers State even as she declared that people of the state are solidly behind him and are prepared to follow him anywhere he leads.

Though she claimed that she does not meddle in the process of selecting candidates for the ruling PDP, the First Lady, however, described Wike’s ambition as fait accompli.

The statement read, “While we consider this a figment of the imagination of the writers of the spurious story, it is also expedient to state clearly that the First Lady does not meddle in the affairs and selection process of the ruling party, the Peoples Democratic Party.

“Consequently, there is no way she can dictate or install anybody into political offices.

“In the case of Rivers State, the First Lady wishes to state categorically that the Supervising Minister of Education, Chief Nyesom Wike is the leader of PDP in Rivers State and he enjoys the followership of the people of the State. The First Lady is solidly behind Chief Wike.

“The people of Rivers State are also solidly behind Chief Wike and are prepared to follow him.

“It is therefore mischievous to insinuate that Mrs. Jonathan is working to ensure that the governorship candidate comes from one of the riverine areas of Rivers State which may not be where the people are going.

“It is also imperative to state that that First Lady is always with the people and will continue to go with the wish and expectations of the people.

“Mrs. Jonathan has not withdrawn her support for Chief Wike at any time and will always work for the interest and the good of Rivers people. As far as the First Lady is concerned, there is no shaking in Rivers State”.

She described the report that she has abandoned the minister as the handiwork of those she called mischief makers, who are bent on promoting bickering and animosity among people who have always being together working for the improvement of Rivers State, saying such should be discountenanced.

On her role in the selection of governorship candidates for PDP in Bayelsa and Bauchi states, Mrs. Jonathan described the report as an attempt to pitch the purported aspirants against their state governors.

“Dr. Waripomowei Dudafa is not only a son to the President but his staff and very close to the family. Dr. Dudafa is not ready to quit his job to contest governorship election. Similarly, the FCT Minister has been a competent and loyal appointee of Mr. President.

“Both of them are loyal to Mr. President and their governors. They are sons of the First Lady as the mother of the nation, who also has very cordial relationships with the governors in question and will never interfere in any process that will lead to the emergence of governorship candidates in the states.

“Mrs. Jonathan appeals to the governors of Bayelsa and Bauchi States to ignore the mischief makers who are bent on disrupting the peace prevailing in those states.

“The First Lady is a mother of peace who believes in the supremacy of the party and democratic principles at all levels and does not dump her friends because of politics, whether they are contesting or not.

“She therefore, urges all Nigerians to uphold the truth at all times, and not be swayed by actions of mischief makers”, the statement added.