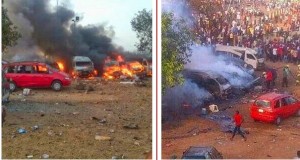 The National Emergency Management Agency (NEMA) and other response agencies have carried out an update of the dead as well as the injured victims of the early morning blasts at the Nyanya Motor Park taken to various hospitals in Abuja and the environs.

Further to the evacuation and to ensure adequate care for the injured, the Director General Mohammed,  Sani Sidi, has visited some of the hospitals with directive that adequate and free media treatments should  be provided to all the victims.

Meanwhile, the agency in collaboration with other response agencies have provided the details of the casualty in various hospitals: including Abuja Clinic with four injured victims, Nyanya General  Hospital has 11, Customs Hospital, Karu 14 injured  and one dead, Asokoro has 25 injured  and 27 dead,
Maitama Hospital – 27 injured with 14 dead victims.

Others are Wuse General  Hospital with 10 injured and 15 dead, National Hospital Abuja  – 25 wounded and 14 dead, Garki hospital has one injured   as well as Medical Centre, Maraba with seven,  bringing the  total number  of the  dead  to 71 and 124 injured victims.

Meanwhile, the Inspector-General of Police, IGP MD Abubakar, in a swift reaction to the blast, has visited the scene of the explosion where he assessed the extent of damage and the impact on the surrounding environment. [Thisday]