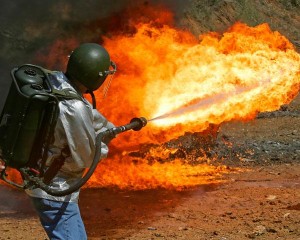 A North Korean official has been executed with a flame-thrower, South Korean media has reported.

He is one of up to 11 senior party officials with close ties to Jang Song-taek — Kim Jong-un’s recently purged uncle — who have been apparently executed or sent to political prison camps.

Jang was publicly tried and executed in December after being found guilty of corruption and activities that ran counter to the policies of the Workers’ Party of Korea.

The regime has shut down the department within the Workers’ Party that Jang previously headed. O Sang-hon, a deputy minister at the ministry of public security, was “executed by flame-thrower”, a source told South Korea’s Chosun Ilbo newspaper.

O was executed because he had followed Jang’s instructions to turn the ministry into a personal security division to help safeguard his business dealings, the paper reported.

The report could not be confirmed, although previous executions have suggested that the North Korean leadership can be inventive when it comes to disposing of anyone who has fallen out of favour.

In 2012, a vice-minister of the army was executed with a mortar round for reportedly drinking and carousing during the official mourning period after Kim Jong-il’s death in December of the previous year.

On the orders of Kim Jong-un to leave “no trace of him behind, down to his hair”, Kim Chol was forced to stand on a spot that had been targeted for a mortar round and “obliterated”, South Korean media reported.

With the purges apparently continuing, there is concern in Seoul at further possible instability in Pyongyang, coupled with a renewed belligerence being demonstrated by the North.

The South Korean military has launched an intensive search across large areas of the country after a third unmanned reconnaissance drone was handed into authorities over the weekend.

The aircraft was more than 80 miles south of the heavily fortified border.