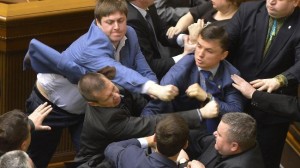 A fight has broken out in the Ukraine parliament with rivals from the far-right nationalist party and communists exchanging punches.

Klitschko had just delivered a speech at the parliament in Kiev saying that the country risked a “real war” after recent upheaval in eastern Ukraine, Fox News reported.

His comments were followed shortly after by a speech from Petro Symonenko, the head of the Communist Party, accusing lawmakers of provoking the current unrest through their actions in bringing down the government of President Viktor Yanukovych.

The remarks caused a reaction among radical nationalists who rushed the podium and seized Symonenko. As Symonenko supporters came to his defence a fistfight ensued.

Symonenko wasn’t hurt in the fight though one of his deputies was seen later with scratches on his face, Reuters reported. 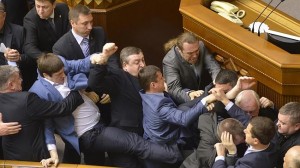 The flare-up comes after increasing tension in eastern Ukraine between government forces and militants who want to follow the example of Crimea and secede to Russia.

On Sunday militants stormed a series of strategic government buildings across a swathe of heavily Russified eastern regions and demanded that Moscow send its troops for support. Ukraine mounted a counteroffensive on Tuesday by vowing to treat the separatists as “terrorists” and making 70 arrests in a night-time security sweep aimed at proving the Kremlin’s involvement in the secessionist movement.