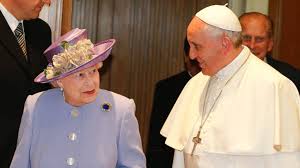 Queen Elizabeth II of Britain has paid a private call on Pope Francis at the Vatican, making him the fifth pontiff she has met.

She arrived on Thursday afternoon wearing a lilac-coloured spring coat and matching hat that are practically the same colours as the wisteria blooming over much of the Italian capital.

The monarch, accompanied by her husband, Prince Philip, was ushered into a small room near the Vatican’s public audience hall for the 30-minute meeting.

Previously, Elizabeth had met with four pontiffs, starting with Pius XII in 1951, a year before her accession to the throne.

Earlier in the day, Elizabeth lunched with Italian President Giorgio Napolitano at the Quirinal palace.

Illness had forced her to cancel a 2013 trip to Rome when she was supposed to see Napolitano. [AAP]