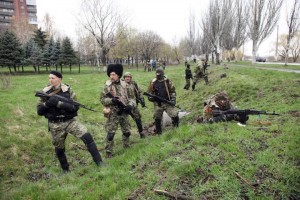 At least two people have been killed and nine wounded in gunbattles between Ukrainian special forces and pro-Kremlin militias that threatened to scuttle the first international talks on the worst East-West crisis since the Cold War.

The clashes across the ex-Soviet state’s separatists eastern rust belt broke out a day after masked gunmen stormed a series of police and security service buildings in coordinated raids that Kiev blamed on the “provocative activities of Russian special services”.

Ukraine’s interior minister says that both sides have suffered casualties during a raid launched by Ukrainian special forces on a police station in the eastern city of Slavyansk that was seized by pro-Russian gunmen.

“There are dead and wounded on both sides. On our side — an SBU (Ukrainian Security Service) officer. The head of the SBU’s anti-terrorist centre has been wounded, as have four others,” Interior Minister Arsen Avakov wrote on his Facebook page.

Mr Avakov added that Ukraine’s special forces have begun to “regroup” but he gave no other details.
The heavily Russified region has been riven by unrest since a team of Western-backed leaders rose to power in February.

This followed bloody protests against the old regime’s decision to reject an EU alliance and look for future assistance from the Kremlin.

Russia has since massed around 40,000 soldiers along Ukraine’s eastern frontier and threatened to halt its neighbour’s gas supplies over unpaid bills.

The raids were accompanied by unconfirmed reports of police stations in other nearby cities in the heavily Russified east of the country also falling under gunmen’s control.

Video footage aired on Ukrainian television showed gunmen opening fire on Saturday during a raid on a police station in the nearby town of Kramatorsk.

Ukraine’s interior ministry had on Saturday denied that the Kramatorsk police station had also been taken by the armed separatists.

Mr Avakov only said in his Facebook posting that “the people of Kramatorsk are unhappy with the actions of the invaders”.

The east of Ukraine has been rocked by protests demanding that the region stage referendums on joining Kremlin rule similar to the one that led to Crimea’s annexation by Russia last month.