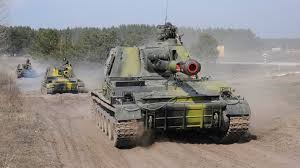 Ukraine is on the brink of “civil war”, Russia warned Tuesday, after Kiev’s leaders ordered troops and tanks towards a flashpoint eastern city to push back a separatist surge supported by Moscow.

The 20 tanks and armoured personnel carriers were the most forceful response yet by Kiev’s Western-backed government to armed raids by pro-Kremlin militants and the occupation of state buildings in nearly 10 cities across Ukraine’s rust belt.

Ukrainian forces set up a cement road barrier and begun checking traffic leading to Slavyansk, an economically depressed industrial city of 100,000 that has been under effective control of separatist gunmen since Saturday.

“They must be warned that if they do not lay down their arms, they will be destroyed,” Ukrainian Security Service (SBU) General Vasyl Krutov told a group of reporters tracking the sudden tank movements.

He insisted that the militants had been reinforced by several hundred soldiers from the Russian army’s Main Intelligence Directorate (GRU).

Witnesses told AFP that at least two Ukrainian military helicopters landed in the nearby town of Kramatorsk with reinforcements for the offensive.

Kiev’s response to the eastern insurgency prompted Russian Prime Minister Dmitry Medvedev to warn that “Ukraine is on the brink of civil war – it’s frightening”.

He urged Ukraine’s “de-facto” authorities – not recognised by Moscow – to avert “terrible turmoil”.

The rapid turn of events on the ground were preceded by a telephone conversation late Monday between Russian President Vladimir Putin and US President Barack Obama on Ukraine that was described as “frank and direct”.

The call, though, appeared to break no new ground.

The Kremlin chief continued to reject any links to Russian-speaking gunmen who have proclaimed the creation of their own independent republic, and who have called on Putin to send in the estimated 40,000 Russian troops now stationed along the border with Ukraine.

But the White House said Obama accused Moscow of supporting “armed pro-Russian separatists who threaten to undermine and destabilise the government of Ukraine”.

The worst East-West confrontation since the Cold War was exacerbated on the weekend by a Russian warplane “buzzing” a US destroyer in the Black Sea, and a visit to Kiev by CIA chief John Brennan that was
confirmed by the White House and slammed by Moscow.

European foreign ministers meanwhile held back on unleashing punishing economic sanctions against Russia in hopes that EU-US mediated talks on Thursday in Geneva between Moscow and Kiev could help de-escalate the situation. [AFP]