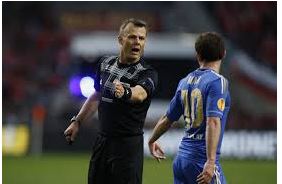 According to UEFA’s official website, UEFA.COM, Kuipers will become the fourth Dutchman to referee the European Cup show piece.

As a result, the 41-year-old will take charge of the 2013/14 UEFA Champions League final holding at the Estádio do Sport Lisboa e Benfica in Lisbon on Saturday 24 May.

It was gathered that Kuipers, who was awarded his FIFA badge in 2006, has overseen 68 matches in UEFA competition, including four in this season’s UEFA Champions League and three in the UEFA Europa League.

Most fans have tipped English referee Howard Webb to be at the centre in the final.

It could be recalled that to qualify for the grand finale, Real ousted the current defending champions Bayern Munich while Atletico, who are making their first Champions League final, defeated Englsih side Chelsea in the semi final.

Who is your favourite to lift this coveted trophy in Lisbon?