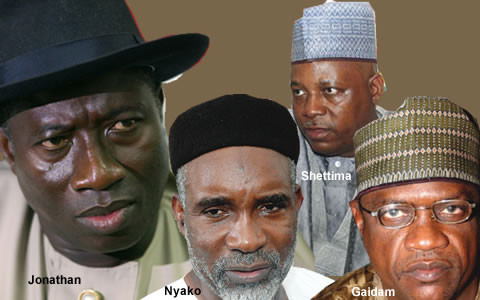 After weeks of speculation and uncertainty, President Goodluck Jonathan on Tuesday finally requested the Senate to approve another six months extension of the ongoing emergency rule in Adamawa, Borno, and Yobe States.

The president’s letter, which was read at plenary by Deputy Senate President, Ike Ekweremadu, is the third of such request.

The last two ones were approved by the Senate. However, it is yet to be seen whether the red chamber will approve Jonathan’s request after the one year expiration of the subsisting period on May 19.

This is even as Secretary of the Northern Senators Forum, Senator Ahmed Lawan (Yobe North), has opposed the request.

He said that even though the military needs more hi-tech equipment to fight the Boko Haram insurgents, it would be wrong to extend the emergency rule.

President Jonathan, in the letter entitled: “Re: Extension of the period for the proclamation of a state of emergency in Adamawa, Borno and Yobe States”, noted that the security situation in the three states remains daunting.

The letter reads in part: “May I respectfully draw your attention to the State of Emergency Proclamation 2013, in respect of Adamawa, Borno and Yobe States, which was approved by the National Assembly.

“By virtues of the provisions of section 305(6)(c) of the Constitution of the Federal Republic of Nigeria, 1999 as amended, the Proclamation aforementioned would have elapsed after six months from the date of approval of the National Assembly.

“However, after due consideration of the representations made of the Federal Republic of Nigeria to that effect, while substantial progress had been made to contain situation in the states, the development that necessitated the proclamation of a state of emergency was yet to abate.

“It would be recalled that the Senate of the Federal Republic of Nigeria had upon consideration of the realities of the security situation in the affected States that had been placed before it graciously approved by resolution, the extension of the State of Emergency for a further term of six months from the date of expiration of the subsisting period.

“The security situation in the three States remains daunting, albeit to varying degrees, in the face of persistent attacks by members of the Boko Haram sect on civilian and military targets with alarming casualty rates.

“In view of the foregoing, I most respectfully request Distinguished Senators to consider and approve by resolution, the extension of the Proclamation of the State of Emergency in Adamawa, Borno, and Yobe States by a further term of six months from the date of expiration of the current term”.