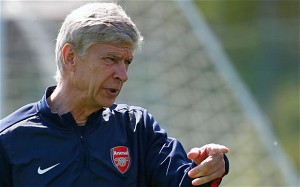 Arsenal boss Arsene Wenger has told the press, ahead of the eagerly awaited encounter against Hull City, his boys are giving their all as they battle with Steve Bruce side in Wembley on Saturday, Informationng was briefed.

The boys from NorthLondon would be hoping to end a long trophy drought since 2005, a task which the boys can complete, unless they give 100 percent, the manager noted.

“No matter how much we talk about it, you can win and lose but you want to come out of the game feeling you have done the maximum to win and that is what we want to achieve.”

“[The drought may make it] a little [more difficult] but at the end of the day once you walk over the line you just focus on your football. ”

“You don’t play with the history, you play with your quality and your desire to play well. It is an opportunity and we have to take a distance with time. We need to just turn up and play well.”

“No matter what the result will be, this club – and this is always most important – can deal with the consequences of any game,”

“What is important is that we come out of the game and have the feeling that we gave absolutely our best, our total energy to play at our best and then
you always accept the consequences.”

Arsenal would be coming into this game with a stronger side unlike the one that collapsed to an horrendous mistake in the 2011 Carling Cup, now Capital One Cup final.