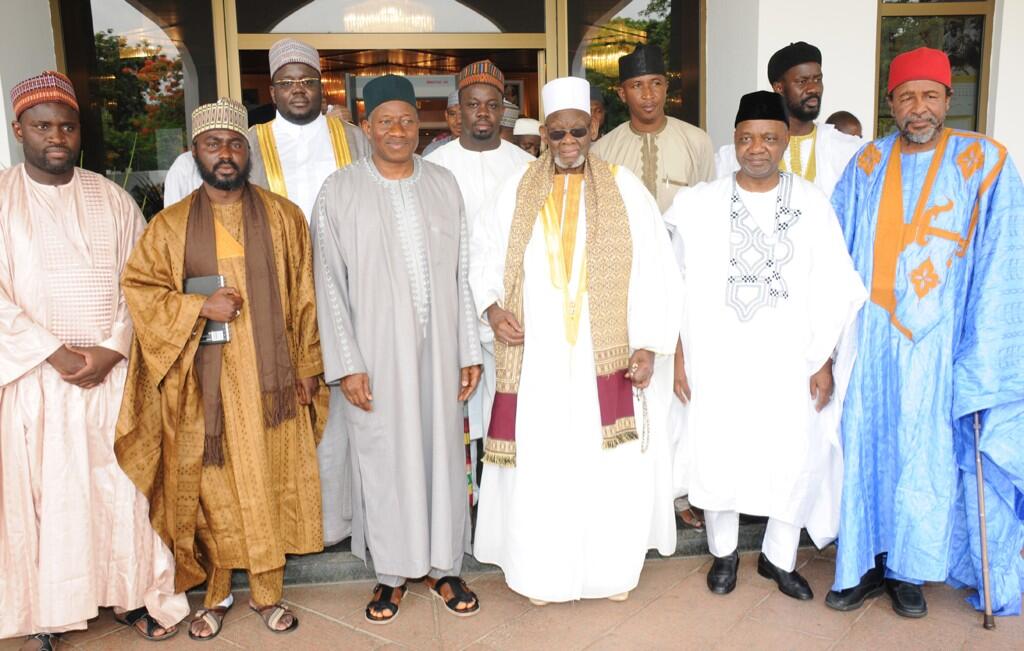 The need to seek divine wisdom and guidance for President Goodluck Jonathan as he explores available options towards ending the Boko Haram insurgency in Nigeria received a boost on Saturday as some Senegalese clerics on Saturday visited the Presidential Villa, Abuja and prayed for him.

The Islamic clerics, ten in number, were led to the State House, Abuja, by Khalifah Sheikh Ahmad Tijani Inyass, the grandson of late founder of the Tijjaniya sect, Shehu Tijani Ibrahim Inyass, on the invitation of President Jonathan.

The clerics met with the president for about an hour inside the first lady’s conference room where they offered prayers for an end to the security challenges facing Nigeria as well as peace and stability in the country.

Speaking with State House correspondents at the end of the meeting, the spokesperson for the delegation, Ahmed Tijani Sanni Awalu said that the clerics, who were in Nigeria to attend the Maulud celebration of Ibrahim Inyass Gombe, were invited to the villa by President Jonathan for spiritual support.

According to Awalu, the meeting was symbolic since past Nigerian leaders like General Yakubu Gowon and Late General Aguiyi-Ironsi had also invited the sect to pray for the country in the past.

He said: “It is a historic visit because it has been done by his father with the then President, Gen. Yakubu Gowon and Gen. Aguyi Ironsi.  So, the history is repeating itself and we come for the Maulud of Ibrahim Inyass Gombe and on his way going home, the President requested for a courtesy visit and Shehu granted that” (sic).

Speaking further, he said: “We put ourselves together; all Muslims and non-Muslims, in peaceful co-existence, prayers so that we can all fight this insecurity in this country.

“The main purpose of coming here is part of the prayers for peace in this country”, he added

Others present at the meeting were the Vice President, Namadi Sambo, Chief of Staff to the President, Brig-General Jones Arogbofa (rtd), Head of Service, Bukar Goni Aji; Minister of FCT, Bala Mohammed.