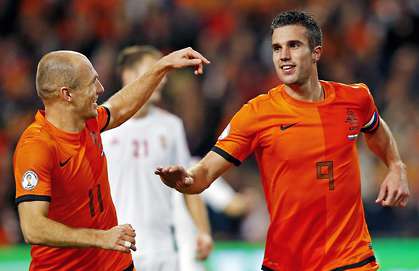 Robin van Persie has hinted that he would be happy to see compatriot Arjen Robben at Manchester United next season.

The Bayern Munich star is one of a number of rumoured targets for incoming manager Louis van Gaal at as he looks to bring the best of Dutch talent
to Old Trafford.

Robben is reportedly willing to join Manchester United should they offer him a substantial increase on his £160,000-a-week wage packet and Van Persie is seemingly keen for the deal to happen.

The Manchester United striker is set to welcome Robben to the forward line with the Netherlands at the World Cup as Van Gaal attempts a new formation for Brazil.

And Van Persie is delighted to be leading the line alongside Robben, insisting the former-Chelsea player can succeed anywhere.

“Would I be happy to play with Arjen Robben in attack?

“Yes, of course. He is a fantastic player and he can play anywhere.”

It seems that Van Persie, who shares a close relationship with Van Gaal, will be at the forefront of any major team decisions made at Old Trafford this
season.

In that sense, his approval of Robben as an attacking teammate certainly opens up the door to a summer transfer.

However, despite Van Gaal having as much as £200m to revitalise Manchester United, he must still convince his former club, Bayern Munich, to sell the 30-year-old.(GMS)