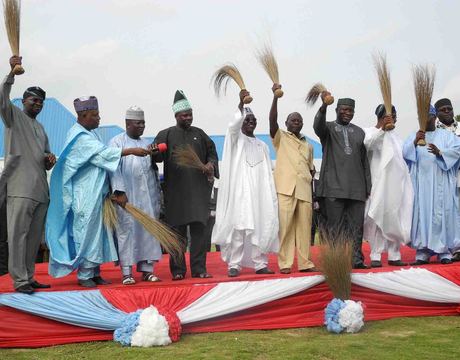 Governors under the platform of the All Progressives Congress (APC) faulted the impeachment notice served on one of their own, Governor Murtala Nyako of Adamawa State.

The governors said the energy been spent on the impeachment move could be expended to recover the over 200 schoolgirls abducted by Boko Haram more than two months ago.

In a statement on Wednesday by APC Governors’ Forum chairman, Imo State Governor, Owelle Rochas Okorocha and signed by his Media adviser Sam Onwuemeodo, the governors said: “Following the report that the Governor of Adamawa State, Alhaji Murtala Nyako, has been served impeachment notice by the House of Assembly, the Chairman of the All Progressives Congress, APC, governors’ Forum and the Governor of Imo State, Owelle Rochas Okorocha, has called on the leadership and members of the Adamawa State House of Assembly to drop the impeachment move in the interest of the peace of the nation.

“Governor Okorocha also advised the President, Dr Goodluck Jonathan, to intervene in the matter and see that the impeachment move against the Adamawa State Governor is brought to a halt, adding that with the horrible security situation in the country at the moment, it would smack of insensitivity for anybody to be talking about impeachment of a sitting governor.

“The APC governors’ Forum Chairman equally urged the stakeholders in Adamawa State not to allow a state already having security challenges to be driven into another round of crisis which the impeachment effort could launch the state into.

“The Imo State governor opined that the energy that would be spent on the impeachment exercise could be expended on the effort to recover the Chibok girls from their abductors that have held them hostage for months now.

“According to the APC governors’ forum chairman, the outside world would not take the country serious if in the midst of all these security challenges across the nation, we would be talking about impeaching a governor.

“He called on all those concerned to allow peace reign by forgetting about the impeachment move against the Adamawa state governor”.

We had earlier reported that 19 out 0f 25 members of the Adamawa House of Assembly had signed the notice of impeachment against Nyako and his deputy, Bala Ngilari, over alleged gross misconduct.