he United States finished off a perfect Send-Off Series with a 2-1 win over Nigeria in front of over 50,000 fans at Everbank Field in Jacksonville on Saturday. The victories followed up wins over Azerbaijan and Turkey, sending the U.S. onto Brazil for the World Cup on a three-match win streak.

Jozy Altidore netted both goals for the U.S., giving the striker the big breakout match he needed after not scoring for club or country since December 4, 2013.

The U.S. started sluggishly, giving Nigeria the ball, but they did well at the back to keep goalkeeper Tim Howard from being tested. After 10 minutes, the U.S. began to find their stride and once they did, they began to dominate the match. 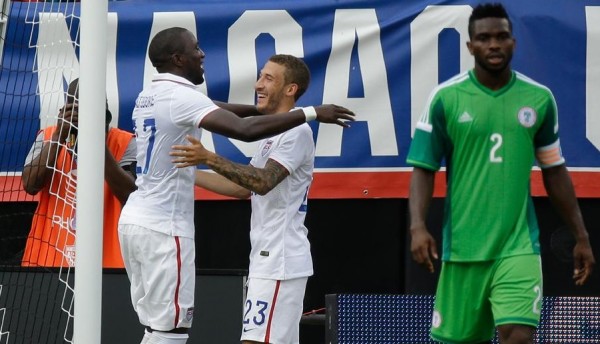 Jurgen Klinsmann’s squad kept the ball and created chances. Even when their finishing — or before that, touch to reel in the final ball — failed them, they were clearly on the front foot. But they finally broke through in the 32nd minute.

A nifty play by Alejandro Bedoya freed the Americans up down the right before the midfielder fired a cross for Fabian Johnson, who got to the ball by the endline and redirected it for Altidore right in front. All Altidore had to do from there was tap the ball in and the U.S. had a 1-0 lead.

The U.S. kept pushing and finished the first half well. They kept the pressure on Nigeria and were the dominant team going into the break.

Little changed at the start of the second half, as the Yanks continued to keep the ball and push for another goal. Even when Nigeria got on the ball, they failed to create chances and Howard was rarely challenged.

In the 68th minute, Altidore got on the board again when he brought down a long ball and found himself one-on-one with a Nigerian defender. He faced goal, got to within 15 yards, cut in and ripped a shot towards the near post. The shot could have been saved by Super Eagles keeper Vincent Enyeama, but it found the back of the net and Altidore had himself a brace.

Once the U.S. got a two-goal lead, Klinsmann brought on Omar Gonzalez and went to three at the back, but the move backfired. Instead of protecting the lead, the defense got shaky, and they conceded a penalty in the 86th minute. Matt Besler committed the foul, but Gonzalez and Cameron were both poor too and Victor Moses converted from the spot.

Still, the U.S. held on for the win, and they now head to Brazil with three straight wins in hand.