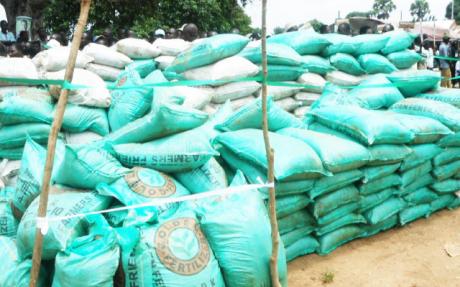 The Federal Ministry of Agriculture and Rural Development has denied its involvement in the alleged N2.4 billion fertiliser scam, following recent invitation of the Permanent Secretary, Ibukun Odusote, and three directors by the Economic and Financial Crimes Commission, EFCC.

Odusote, who made the clarification yesterday at a press briefing in Abuja, said there was no basis for the claims made to tarnish the image of the ministry as far as transparency was concerned.

She maintained that since the current leadership of the ministry came on board, the loopholes and subsequent frauds associated with fertilizer distribution was cleared in less than 90 days, culminating in the electronic registration of 10 million farmers across the country.

Odusote said: “We are not involved at any point at all in fertiliser purchase and sale because government officials are not in the process.

“It is important to clear this that the Ministry of Agriculture is no longer involved in the business of fertiliser, and it cannot be true that we have any business with the alleged N2. 4 billion fertiliser scam.

“I was at EFCC last week and was to make clear about the alleged N2.4 billion. What the EFCC wanted was to confirm whether we have actually paid them and we confirmed that we have not paid them.

“We have not paid because we needed to clear all that needs to be cleared. We are clear with our system and have received advice on how we will pay but only on the basis of what we have.

“The EFCC said we should pay what we are owing the agro-dealers, which is the N844, 700 million and it has been agreed that is what we will pay, and we have started paying them the money.

“I don’t know any agro-dealer because there are so many of them, like this ones they are in Taraba State, and they are at the states’ various redemption centres, and I don’t go there, and how could I have connived with them?” she asked.

“There are people who have robbed the government in the past are not happy with the transparency mechanism put in place in the process of fertiliser distribution, and are fighting it”, she added.

However, the permanent secretary disclosed that there was an intended fraud by three agro-dealers, who borrowed money from their banks, with whom they had issues.