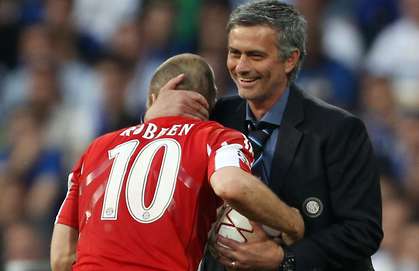 Chelsea manager Jose Mourinho believes
Bayern Munich and Netherlands winger Arjen Robben must be more honest with referees during matches. The Dutch superstar was criticised after winning a controversial last- gasp penalty against Mexico in the World Cup last 16 on Sunday – and Mourinho feels he is one of a group of players who are actively
attempting to deceive match officials.
Robben, who turned 30 last January, worked under Mourinho for three years at Stamford Bridge. And although the Blues’ boss feels that defenders do
actively target Robben, he has little sympathy for the winger when it comes to the issue of diving.

Mourinho was quoted by The Sun as saying: ”I also know that because of his speed and because of his creativity he is punished a lot with fouls by opponents who cannot stop him.

“I think it’s important for the players to help the referees.

“But the reality is that not every player behaves that way and referees have a difficult job.”{GMS}