A member of the Peoples’ Democratic Party in Kogi State Mr. Ayodeji Olumudi has been identified as one of the suspects paraded by the Federal Special Anti-Robbery Squad of the Nigeria Police Force on Monday. 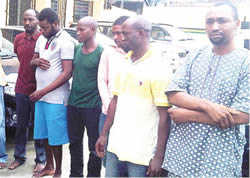 PDP aspirant, Olumudi in red with other suspects

Olumudi, who wore a red T-shirt during the parade, had contested for a seat into the House of Representatives on the platform of the PDP during the 2011 general elections, punch gathered.

It was reported reported on Tuesday that the FSARS, Adeniji-Adele Street, Lagos, paraded a chief of the All Progressives Congress in Ekiti State, Itunnu Odeyemi, and eight others that they were notorious for snatching exotic cars in the country.

Odeyemi denied being a robber, but said he provided his political thug, Omoniyi Ajewole, with a gun, which was recovered by the police, which led to the arrest of the Ekiti APC member.

Olumudi who was later identified after the report was published online turned out to be a PDP aspirant whose campaign poster during the 2011 elections was obtained by the Nation. 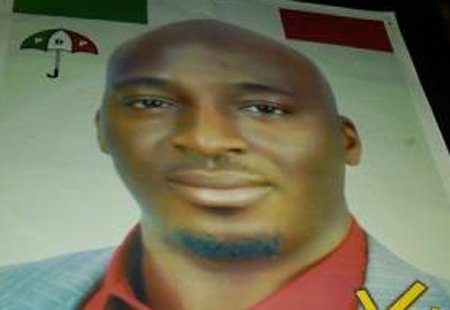 “The suspect (Ajewole), in the process of interrogation, told the police that he preferred to be called a political thug than an armed robber. And that had changed the entire narration and we began to probe further. You can understand why his own story was relevant to us; a gun was recovered from him by the police. In the process of asking where he got the gun, he said it was given to him by an APC honourable in Ekiti State.

“The idea of anybody trying to read political colouration into it is rather unfortunate. We were concerned about the robbery, and if the suspect had not opened up that he was a political thug, perhaps that would not have come up. Ajewole said it so openly that it would have been difficult for anybody to contest the fact. But if anyone has any additional information from anywhere, that is alright.

“The other person, even if he was a politician, the interrogation probably never took us to that direction. In investigation, it is not possible for you to know everything about a suspect. The gun is a material evidence recovered from the suspect, and it is relevant to establishing the robbery case. It was in the process of finding out the owner of the gun, that the suspect confessed he got it from an honourable in Efon-Alaaye, Ekiti State. So, you can see the way it was built up. So, if anyone belongs to any other political party, that has nothing to do with the case, that is not my business.”