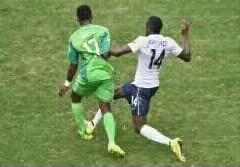 Paris Saint-Germain midfielder Matuidi was shown a yellow card for the late tackle during his side’s 2-0 over the Super Eagles, which left Onazi facing months on the sidelines with a fractured leg.

France will now meet Germany in the quarter-finals but Maradona believes Matuidi shouldn’t be there, insisting the tackle deserved a harsher punishment than the four-month ban handed to Suarez for his bite on Chiellini.

“Now I want to see the reaction of Fifa. The reaction of [Pele] and of [Franz] Beckenbauer. You must have a lot of nerve to not see that this is worse than Suarez.”

Matuidi said he apologised for the challenge for after the game.

“I’m sorry,” he told the media after the game. “I’ve not gone in to hurt him; I’m disappointed because I’m not a dirty player.

“I went into the [Nigeria] dressing room afterwards to apologise.”

Maradona previously described the four-month ban handed to Suarez as a “disgrace”.{Goal}