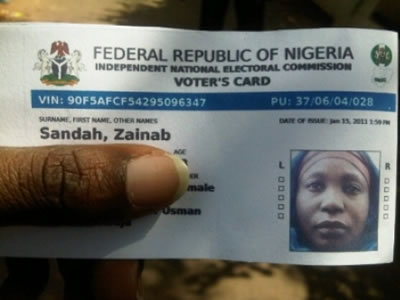 Ahead of the August 9, 2014 governorship election in Osun State, the Commissioner for Youths, Sports and Special Needs, Mr. Stephen Kola-Balogun, has raised the alarm over the alleged dubious act of collecting the voters’ cards of youths and elderly ones by some unscrupulous politicians in the state.

Kola-Balogun, who sounded the alarm while speaking with newsmen in Osogbo, the state capital, described the development as undemocratic, wicked and criminal.

He warned politicians to desist from such action or be ready to face the wrath of the law.

According to the commissioner, some people are currently collecting voters’ cards of youths in exchange for N10, 000 while the elderly ones are being tricked to submit their voters’ card for peanuts.

He explained that selling and buying of voters’ cards is a new approach to rigging and must be discouraged for democracy to thrive.

He said: “as the Commissioner for Youths and Special Needs in the state, the unfolding scenario is not acceptable, it is criminal and no reasonable government will watch the vulnerable being dubiously exploited without moving against it”.

While calling on youths not to mortgage their future, Kola-Balogun called on law enforcement agents to investigate the allegation and bring to book those found culpable.